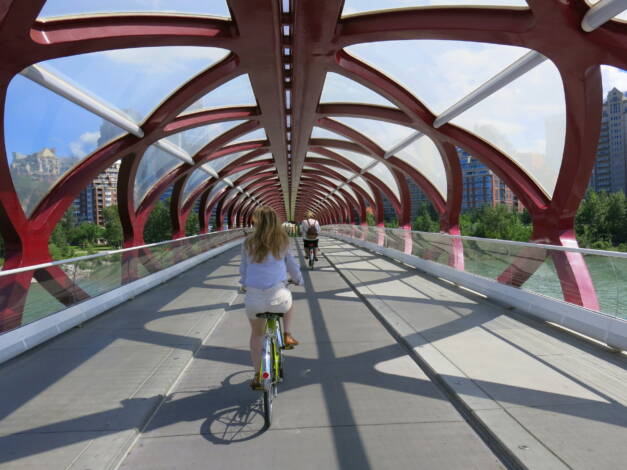 This is a series where we check out various cities and look at the sorts of places you don’t always find in the tourist guides; fun restaurants and bars and shops where you’re likely to find a good number of locals as well as visitors. Today we take a look at the increasingly cool scene in Calgary.

Vin Room Mission: Vin Room is a hip spot on 4th St. SW offers up a wide variety of foods, everything from charcuterie to lobster nachos or lemongrass chicken meatballs. “I like to eat and I like to drink,” the engaging owner, Phoebe Fung, told me. For a treat, she started my meal with truffle oil popcorn and champagne; a killer combination should the mood ever strike you at home. She also operates Vin Room West and has a restaurant at the Calgary Airport.

Oxbow: This is the new dining spot at the luscious Kensington Riverside Inn, the only Relais and Chateaux hotel in Calgary. I had lovely lamb with sausage and wild rice, as well as a tasty duck rillette. Current menu items include Smoke Alberta Bison Flank Steak, Eggplant Picatta and other dishes. It’s an intimate space with a great view of the kitchen.

Other Options: Model Milk is a tremendous place that consistently gets mentioned in top restaurant lists. Ditto for Ten Foot Henry, which is heavy on the veggies.

The Sound of Music: Studio Bell, home of The National Music Centre, is a gorgeous spot that celebrates Canadian music. You’ll find displays honouring everyone from Drake and Michael Buble to Gordon Lightfoot and Oscar Peterson. Not to mention Neil Young, Ann Murray and Justin Bieber. There are plenty of fun, interactive bits and videos to watch and instruments you can try. There’s also a live music venue next door at the old King Eddy Hotel. The centre also has the old mobile recording studio used by the Rolling Stones to make their classic LP Exile on Main Street. The studio also played a role in the making of Led Zeppelin’s Stairway to Heaven, I was told. There’s a special exhibit on now about K.D. Lang, one of the great voices in Canadian history.

A Glimpse of the Past: It sounds a bit fuddy duddy, but Heritage Park is a marvellous spot south of downtown Calgary. You’ll find cool, old buildings that help put the “cow” in “Cowtown,” as well as a steam train, wagon rides and a paddlewheel boat that plies around Glenmore Reservoir. Older folks, and probably a lot of kids, will get a thrill out of the park’s Gasoline Alley. They’ve got polished, gleaming cars from just about every era, including a rare, baby blue Auburn from 1932 and dozens of other gems that have beautifully resorted and buffed to a shine worthy of the Stanley Cup. The colourful old gas pumps are sleek, stylish and as vintage as vintage gets. On a more serious note, Heritage Park also is home to The Famous 5 Centre of Canadian Women, a home that Canadian women’s rights advocate Nellie McClung once lived in.

A taste of Asia: It’s a treat to wander around the city’s small but highly enjoyable Chinatown. The aroma of pork buns wafts through the air as you wander past produce stands selling bright yellow zucchini or wild, pink and green dragon fruit. A few doors east of Centre Street is an alley with a very cool mural of Asian buildings and other scenes in shades of neon pink, orange, blue and green. If it’s a nice day and the doors are open, peek inside the back of the local shops as you walk down the alley.

East Village: Liz and Lottie is a slick, urban store on 4th St. SE in the trendy, growing East Village area. The shop, I was told, is named for the owners’ grandmothers, and how nice is that? You’ll find everything from Status Anxiety brand purses to pocket bicycle pumps and tiny barbeques made for the growing Calgary condo set. They also have cute baby moccasins and a cheeky book called the “My Bed Guest Book” that folks can sign if they, um, sleep over. “It’s such a vibrant, growing community,” owner Heidi Blanchette told me.

Inglewood: This has been voted one of Canada’s top neighbourhoods, and it’s one I always love to kick around in when I come to town. Just getting there is fun as you cross over a funky bridge and find yourself in a very urban-scale area, with low-rise, brick buildings and a huge variety of shops. Kent of Inglewood sells everything from knives to men’s grooming products, while Artesano’s goods range from Marilyn Monroe purses to gnome statues (and who doesn’t love a good gnome statue?). Lemonciello has stunning home décor items. If you’re tired of shopping, The Esker Foundation is a great spot to stop and admire stimulating works of art.

Kensington: This is another nice, walkable part of Calgary that’s just a few minutes from downtown. Kismet Clothing and Jewelry focuses on one-of-a-kind dresses, shoes and purses; perfect for folks who don’t want to be seen wearing the same thing as their friends or co-workers. On 10th St NW, New Age Crystals and Books is a great spot if you’re into the healing power of crystals or love nothing more than firing up your lava lamp on Friday night with The Beatles’ “Abbey Road” cranked full blast on your vintage record player. Manana Imports features everything from wool scarves to world music CD’s and gleaming Buddha statues.

The aforementioned Kensington Riverside Inn is a wonderful, boutique hotel in a cool neighbourhood alongside the Bow River. They’ll lend you a bike to explore the city if you wish, and they’ll put your coffee outside your door for you in the morning; a nice touch. The owners also operate the sleek Hotel Arts in downtown Calgary. Other fine options include the stately Fairmont Palliser and the stylish Le Germain Hotel Calgary.

Canadian hotels have been facing a ruthless pandemic for nearly a year. How are they coping? What's changing? Canadian Travel News sat down with IHG Canada's Beata Cieplik for a long, insightful chat. … @IHG @MichelleDias #hotels #travel #Canada

Canadian hotels have been battling the COVID-19 pandemic for nearly a year. We chat with IHG (InterContinental Hotel...