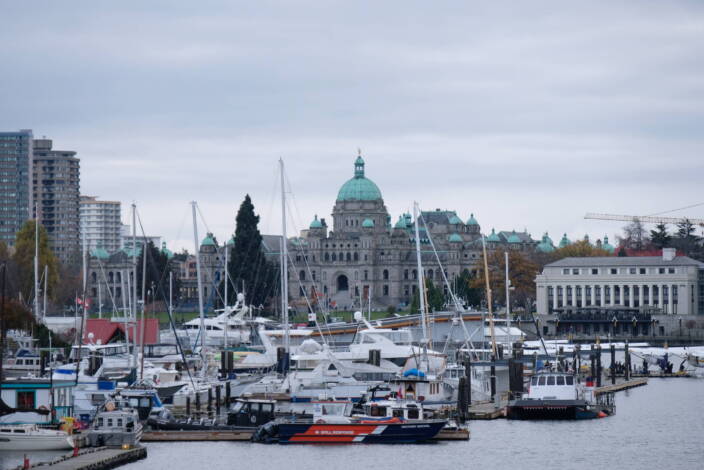 Like a Local: How to enjoy Victoria, British Columbia

Victoria is known for its natural beauty. It’s also a fun and youthful city with great craft beer places and wonderful, fresh, local food. Here are seven ways to enjoy the city like a local, none of them involving tea at the Empress Hotel

It’s only a 20-minute walk northwest of downtown, but Wheelies Motorcycles and Café is a place that only a local would know about. It’s a former car repair shop that’s been turned into a bar and restaurant/café that’s an homage to motorcycles; with motorcycle movie posters on the wall and classic rock blaring from the speakers. Happy hour draught beer and cocktails are only $5. They also sell helmets and other motorcycle memorabilia. A walk here from downtown takes you past both Vancouver Island Brewery and the hip and happening Phillips Brewery.

Several neighbourhoods in Victoria have homeowners who built little fairy homes or even fairy villages; with tiny little houses, some with gnomes or small forest animals. Probably the best place to see them is in James Bay, a pretty area with tidy wooden homes just south of the harbour and the Fairmont Empress Hotel. Some folks have gone to elaborate lengths, while others are quite simple. One homeowner on Clarence Street has hung small teacups and coffee mugs from the cherry tree in front of their house, while another front yard is filled with small and large rocks painted to look like everything from hamburgers to soccer balls and Santa Claus. Painter Emily Carr used to live at 646 Simcoe Street, a home she used as a model for her book “A House of All Sorts.

Beacon Hill Park is one of Canada’s best urban parks; a 75- hectare district on the edge of downtown that features towering, majestic Douglas Fir trees, colourful gardens that are in bloom almost all year long, a children’s petting zoo, tennis courts, a cherry tree grove and more. You’ll also find what’s said to be the world’s largest free-standing totem pole, which rises 38.9 meters into the British Columbia sky and features everything from carvings of whales and bears. This wasn’t always a slice of natural heaven. Back in the day, part of Circle Drive was the oval of a horse-racing track. The land was ceded to the city in 1882.

They can grow almost everything on Vancouver Island, so you’ll find amazing produce, a good deal of it organic. In the heart of downtown, Saveur makes amazingly flaky scones and serves up a great pork belly sandwich. The interior design features greys and blacks and a sofa with purple, gold and pink-striped cushions. Breakwater Café and Bistro’s head chef used to work at one of the top restaurants in Mexico City and takes 20 hours to make his blue tortillas, which are firm and non-crumbly. The duck à la orange confit tacos are amazing, with locally-raised duck, ancho chiles and cilantro. I also loved the tostada starter with albacore tuna, avocado and pickled bull kelp. The Village Restaurant has five outlets in the city, one on the edge of Chinatown. I walked in and spotted a stencilled motto on the entry that said, “Where the locals are.” The emphasis is on local food and service, and they do a great job. I was there for breakfast and had the Village Hash with eggs, potato chunks, onion, Red Barn local bacon, zucchini and melted cheese. They’re famous for their pancakes and also serve mimosas and caesars. Spinnakers is a fine and attractive gastro brewpub that also sells house-made chocolates and good food. The beers are solid and tasty without being gimmicky. The restaurant sits on a bluff overlooking a pretty section of Victoria Harbour. They also have guesthouses. One of the top dining spots in town is The Courtney Room. Located inside the wonderful, boutique Magnolia Hotel and Spa, it offers up dazzling craft cocktails and inventive, fresh local food. You’re only a short walk from Fol Epi,  a café that serves a variety of cheese and pates, as well as croissants worthy of a Paris boulangerie.

Talk about your fairy tales. Peggy Pemberton-Carter, who was born in Shanghai, met Prince Nicholas Abkhazi in Paris in 1922. The prince had been living in France since escaping the Bolshevik Revolution in Russia, and he and Pemberton-Carter struck up a friendship. She lived all over the world for years, but they stayed in touch. The Prince was captured in the Second World War but lived. Pemberton-Carter was imprisoned in Shanghai during the war. When hostilities were over, she was able to make her way to Victoria, where she had friends. Pemberton-Carter and the Prince re-established contact, and they were married. They built Abkhazi Garden at their home on a small hill in Victoria and lived together for several decades. The prince died in 1987and Pemberton-Carter passed away in 1994. The Land Conservancy of British Columbia bought the property in 2000, and it’s now run by volunteers. The gardens are a delight to stroll around, and there’s also a pretty teahouse. You’ll find the garden on Fairfield Road, a kilometer or two east of downtown Victoria.

A bike ride or a drive along Dallas Drive is a treat for locals and tourists alike. The road takes you along a beautiful section of the coast, with views of the Olympic Peninsula in Washington State and beautiful homes that look like the sort of thing you’d find a few miles south (just a few) in Pebble Beach, California. There are several waterfront parks to enjoy and a couple of fine beaches. Take a detour into Ross Bay Cemetery to check out the cool gravestones and the dozens of deer you’ll likely see nibbling on the grass. A little further along you’ll spot an old, white observatory on a hill called Gonzales Observatory. It’s a short, uphill hike to see the observatory, which offers fine views of the coast. Nearby are the remains of a Second World War observation tower. You also can check out an old Chinese Cemetery near Trafalgar Park.

Oak Bay is a posh but not overly pretentious area east of downtown Victoria, with pretty boutiques and independent restaurants. Vis à Vis is a fun restaurant where you can interact with your bartender and charcutier as they prepare your drink or snack. Hide and Seek is a bright, pretty coffee shop. There’s also an independent book store in Oak Bay called Ivy’s, and any neighbourhood that still has an independent book store is automatically a good place to visit if you ask me. I didn’t get there on this trip, but I love the coffee at Fernwood Coffee Company, which has a hip, urban vibe. In the Cook Street Village area, Bubby Rose’s Bakery and Cafe is a terrific spot for everything from apple cake (a very filling breakfast, I must say) to pizza and cinnamon rolls.

The Magnolia Hotel and Spa is a boutique property a block from the waterfront and has posh rooms with all the amenities you need and a classic, understated design. The staff is quite helpful, and you can grab a coffee or a quick breakfast in the lobby each morning. Swan’s Suite Hotel sits atop Swan’s Pub and has a number of rooms for rent in a convenient downtown location near the waterfront. Rooms are varied in style and design and many have a separated bedroom or a loft. Some also have small kitchens, and a few have patios, so they’re great for families or folks who want a little more space. The massive, stunningly designed, two-story penthouse suite has a rooftop garden and, I was told, rents for just $750 a night.