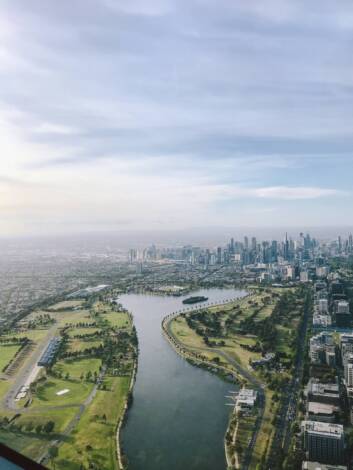 There’s not a lot of positivity out there right now if you look around North America or Europe. But things are brighter in other parts of the world. Here’s my “Signs of Hope” blog post for October 29.

It was, as George Harrison once sang, a long, cold lonely winter for Melbourne. But Australia’s second largest city is finally reopen.

The city was pretty much shut down in July due to a spike in the virus. Australia being in the Southern Hemisphere and all, that was the dead of winter for them.

But things improved, and the city was re-opened on Tuesday.

The Guardian reports that the Angus & Bon New York steakhouse in Melbourne wasted no time serving customers, swinging its doors open to late-night diners at the stroke of midnight.

“Just like on New Year’s Eve, the soon-to-be patrons yell out the countdown, popping champagne and cutting a red ribbon when the clock hits 12.”

That being said, it doesn’t appear that Australia will open for Canadians or Americans to visit until perhaps late next year.

Singapore will lift border restrictions on visitors from mainland China beginning November 6, a further reminder that the nation where the coronavirus outbreak first began is firmly on the road to recovery as the pandemic rages elsewhere, Bloomberg reports.

Singapore also is talking about a “bubble” travel arrangement with Australia.

Singapore reported seven cases today, all of them imported. (That’s not a typo by the way. The island nation reported SEVEN cases today. Singapore has a population of 5.6 million. That’s roughly twice the size of Toronto, which reported 420 cases today.)

MORE OF THE CARIBBEAN OPENING UP

The Caribbean continues to do pretty well against the virus. The Bahamas may delay its planned November 1 opening, but Costa Rica appears to be going ahead with an opening on that date.

Caribbean Airlines is continuing its expansion with the launch of a new route between Toronto and Guyana in South America. The route will begin November 1 and will operate twice a week on Mondays and Fridays, with a flight time of a little over five hours.

I’ve never been but I’ve seen presentations on Guyana and it looks positively stunning, with tons of amazing nature and plenty of open space to enjoy.