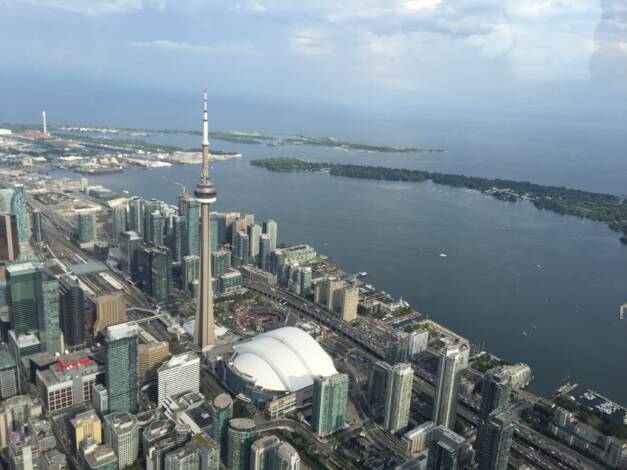 “Economic growth, fueled by immigration and global investment, have Canada’s largest city poised for big things,” the report said about Toronto, which was 17th in the world in last year’s rankings.

“With almost half of its population foreign-born, Toronto’s #13 spot among the world’s cities—it’s highest finish ever—is powered by diversity and education, the two components of our People category, for which the city ranks #3, just behind Dubai and Abu Dhabi. But Toronto’s diversity is less tied to migrant labour and more to the long-term opportunity in a city that earlier this summer was crowned as the fastest growing metropolitan area in all of North America. As in, the continent.

“Ryerson University’s Centre for Urban Research and Land Development revealed that Toronto overtook Dallas– Fort Worth–Arlington for the top spot. Getting less attention is the projection by the University of Toronto that, in less than 50 years, the city will trail only New York City and Mexico City in North American population.

“The city’s openness, combined with its economy (with the eighth-most Global 500 head offices in the world) has resulted in unprecedented density and a satisfaction with just staying put, sated by real estate wealth and the comfort that the world is already in town. Of course, winning the first NBA title outside of the U.S. in history doesn’t hurt the local pride, either.”

Here’s what the reports’ authors said about the other Canadian cities in the top 100:

The most Asian city outside of Asia is as smart as it is gorgeous. Too bad about the price of entry.

As the terminus of a cross-country railroad constructed by laborers from
all over Asia, Vancouver was built with a foundation of Asian sensibility. It ranks 5 in our People category, a combination of Educational Attainment and Foreign Born Residents. Increasingly, the term “visible minority” doesn’t mean anything here. Despite the success of this eden of coexistence, not all is calm. Always on the lookout for foreign investment, various incarnations of provincial and federal governments made citizenship
available to foreigners with sufficient capital, with little oversight on taxing
outside funds. As such, Vancouver’s housing prices are now mostly hitched
to a global context, largely decoupled from local wages. Fortunately, Silicon
Valley and Seattle tech giants are coming to town with plenty of jobs, coaxed by Canada’s openness to immigration from global tech talent largely spurned by four years of nationalist policies south of the border. Additionally, Canada’s—and Vancouver’s in particular—comparatively
pro-active response to and containment of the pandemic has endeared the city to even more global nomads who can work from anywhere. The University of British Columbia, ranked #15, is also a draw for the next generation of Vancouver’s increasingly global citizenry.

Vancouver was ranked 41st last year by Resonance, which is based in the city. Moving up seven spots is a notable achievement.

Outgoing, two-cheek-embracing, convivial-above-all Montreal took a hard, early hit as the pandemic struck. Deaths in residences for the elderly
exposed the ugly underbelly of an underfunded industry and brought about
a reckoning for both governments and families in terms of the meaning of care. Montreal’s coronavirus cases were the worst in Canada for weeks at a time in Despite the cancellation of iconic programming like the Grand Prix, the city acted swiftly to turn major streets into creatively-styled outdoor hangouts with art and music, and vastly increased bike lanes. The summer of 2020, as ever in the city, was deliriously enjoyable and tragically short—not for nothing does Montreal rank 25th in the world for the number of quality activities, shows and events. Montreal also ranks 31st for its number of foreign-born citizens, and 30th for the percentage of residents with higher education. Universities are highly ratedv— highly respected McGill climbed in the rankings—and Université de Montréal has become a hot spot of the Artificial Intelligence kind. Montreal’s growing tech expertise hasn’t put the city out of reach: it hit #22 in our Gini coefficient ranking for
inequality. But it’s becoming increasingly clear: the city’s future may be more dependent on its growing brains than on its considerable heart.

Montreal was ranked 45th last year, which means they moved up four points.

Canada’s energy capital is building for its future, despite a struggling oil industry.

Although Toronto is Canada’s business heart, it’s Calgary—with Canada’s
youngest population and home to its oil industry—that’s always been second. People here walk with the velocity of New Yorkers and cut to the chase like Texans. Ranking #23 globally in GDP Per Capita, by far the highest in Canada, the city is now in the midst of an economic hardship not seen in decades due to the struggling oil and gas industry (the fortunes of Calgary rise and fall with the price of crude). The pandemic added to the misery, which has manifested into the highest unemployment rate in Canada, at 15.5% over the summer of 2020. The challenge in this city of risk-takers has always been to even things out by diversifying away from fossil fuels, building an economically resilient home town for a place that ranks #9 globally in our People category, including #11 for Educational Attainment
and #24 for Foreign-Born Residents. New projects, like the recently opened
Central Library in the burgeoning cultural hub of East Village, reinforce the
city’s long-lauded quality of life, despite current struggles.

The cosmopolitan capital of Canada has a reputation for brainpower that’s attracting the world.

Canada’s capital—“the city that fun forgot” to Canadians—has forever lived in the shadow of its exciting big-city sisters, Toronto and Montreal. But a
national 150th birthday in 2017 brought attention the citizens (ranking #19 in People) of a city where one in four is an immigrant (Ottawa ranks #40 in
the world for Foreign-Born Residents). Ottawans are uncommonly intelligent: the city ranks #6 in Educational Attainment and the highest-ranking of its four universities, Carleton, places #82 globally. All that brainpower has poured into some 1,750 knowledge-based businesses—everything from clean technology to life sciences to digital media, aerospace and software. About 68,000 jobs are the result—along with
an 80th-place ranking in global GDP Per Capita. In a city with a relatively low cost of living, that means there’s money to spend on its plentiful things to do (with a #60 ranking in Attractions) and underrated good times.

The environment for a molecular evolution from chilly productive resource town into curated hotbed isolated sufficiently to do its own thing has been here for years. The University of Alberta (ranked #59 globally), healthy
immigration and the government dollars that come with being a provincial
capital have already created a place known around the world as “The City of Festivals.” From Fringe theater to street performers to an increasingly important international film festival, there are more than 50 large, city-sanctioned events every year. A recent downtown revival has now catapulted the city into the “urban renewal” conversation that has been happening in other North American industrial regions. The catalyst has been the new Rogers Place arena downtown, occupied by the National
Hockey League’s Edmonton Oilers. But it’s not all good news. The fossil
fuel–based economy was already in a tough position before the pandemic
and has only descended since, making Alberta among Canada’s economically hardest hit provinces in 2020.

Edmonton moved up from 83rd last year to 76th this time around. That’s pretty darned good.