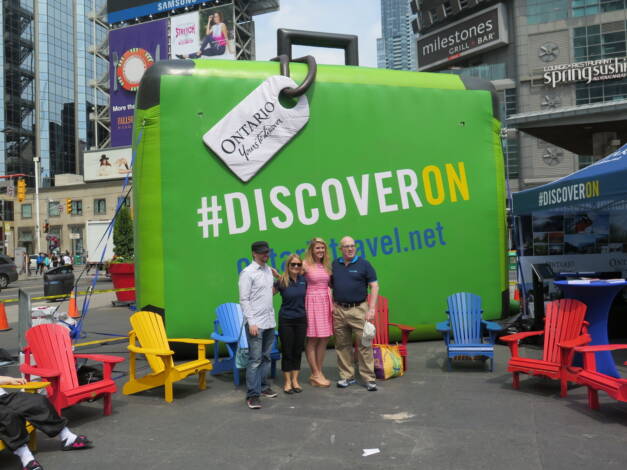 Doug Ford wants to help Ontario residents explore their own back yards.

Media reports say that the Ontario government is looking at how it might help provincial residents take local holidays, perhaps with a subsidy of up to 20%.

The Toronto Star’s Martin Regg Cohn said the Ford government is setting aside $150 million to help make it happen.

“We wanted to let the tourism sector know we are there for them,” Finance Minister Rod Phillips said of the tax credit. “We will need to coordinate that with public health but it will be a powerful tool.”

The government tabled its provincial budget today, and there was more than a little attention paid to the tourism and travel industries, which was hit first by the pandemic and possibly hit harder than any industry in Ontario, and perhaps the world.

A section of the Ford government’s budget carried the headline “2021 — Year of the Ontario Staycation.”

The Star story said the Ford government will consult with industry stakeholders to figure out how a subsidy might work.

“When the COVID-19 outbreak began, Ontario’s heritage, sport, tourism and culture industries were among the most heavily impacted,” the budget said.

It also explained that 282,100 jobs were lost in Ontario’s tourism and travel sectors (including hotels, entertainment venues, tourist attractions and restaurants) between February and May.

The government also announced a three-year, $180.5-million plan to help restaurant and tourism workers retrain for jobs in other sectors, including the skilled trades.

“TIAO’s budget proposals to the government supported the economic recovery of the tourism and hospitality industry and preserve Ontario as a leading tourism destination and many of them were addressed in today’s budget announcement,” officials said.

In an interview with Canadian Travel News, TIAO President and CEO Beth Potter said Ford and his government “recognized that, without a recovery from the tourism sector, it’s going to be hard for the rest of the economy in Ontario to recover.”

Potter said she thinks the 20% travel credit for Ontario residents to stay home and spend their vacation time in the province is a great idea.

“I think it will help. You know we have a travel deficit every year in Ontario. With international visitation down and the U.S. border still closed and consumer confidence about travelling far from home pretty low, maybe we can reduce some of that deficit” by having provincial residents vacation close to home.

“I think it’ll make a big difference, and really give people that little push to get out the door.”

Schneider said she understands the tax credit for local travel will be in place through 2021.

Both Schneider and Potter said they give Ford and his government full marks for understand the role tourism plays in the Ontario economy.

“Lisa MacLeod is one of our biggest cheerleaders,” she said.

Schneider also pointed to a number of items in the budget that help the tourism industry, including measures to boost business liquidity, the approval of take-out alcohol from restaurants being made permanent, a film tax credit and increased funding to help businesses create a digital presence.