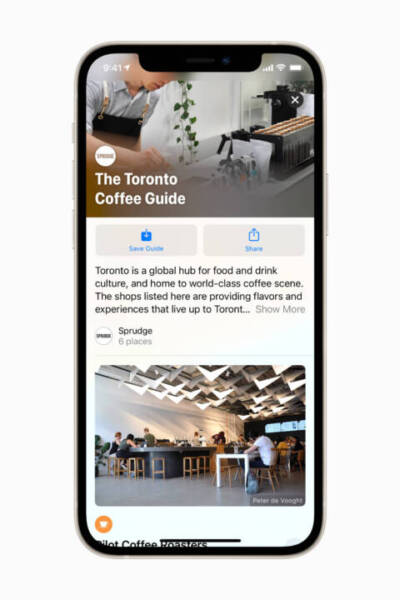 Apple Maps users in Canada can now find enhanced land cover information, more true-to-life renderings of cities, more 3-D images of major attractions and richer details for cities and places from coast to coast. Not to mention curated guides to great Canadian cities and enhanced features for their popular “Look Around” platform.

From more detailed views of small lakes in the Northwest Territories to better maps of docks on Lake Ontario, the new maps deliver a greatly enhanced user experience for both Canadians and visitors.

“With Apple Maps, we have created the best and most private maps app on the planet and we are excited to bring this experience to our users in Canada,” said Eddy Cue, Apple’s senior vice president of Internet Software and Services. “We have rebuilt Apple Maps from the ground up to provide better navigation, richer detail, more accurate information for places, and incredible features like Look Around, curated Guides from trusted sources, cycling directions, and much more. Now it is easier than ever for users in Canada to explore and navigate the world.”

Apple also has improved its “Look Around” feature for Canadian cities, including not only major cities but smaller one such as Saskatoon and Quebec City. Look Around allows Apple Maps users to see real photos of popular destinations and maneuver around, so they can find out what’s down that cute little street in Quebec City or what they might find around the new Remai Modern museum in downtown Saskatoon.

Apple went to great lengths to improve its maps feature, with vehicles driving all around Canada and even planes flying overhead to get all the details and make the maps even more true to life than before. You can zoom in on Calgary and see great images of downtown as well as details about Prince Island.

There also are improvements for people on the go. Rather than simply directing a driver to the parking lot of a major shopping mall, Apple Maps can now help you find the best route through the parking lot to the door that’s best for the shop you’re heading to. When you’re driving, instead of a suggestion that you turn right in 100 meters, you’ll now be told something more natural, such as “turn right after the next light.”

Below are some highlights

Guides provide a curated list of interesting places to visit in a city, created by a selection of trusted local resources, including Toronto Life and Narcity, and global authorities such as Lonely Planet. Guides are a great way to find popular attractions, discover restaurants, and explore new recommendations from respected brands. You can even save suggestions to your phone or device for later reference. Check out offerings such as “unusual sights in Montreal” for a fresh look at a great Canadian city.

Explore with Look Around

Maps offers interactive street-level imagery with high-resolution 3D photography and smooth and seamless transitions through major cities with Look Around. Customers from anywhere in the world can navigate through locations across Canada, including cities like Calgary, Montreal, Toronto, and Vancouver, as well as parts of Newfoundland, Nova Scotia, and many more.

Additional features in Maps include:

— Electric vehicle routing, which will be available on compatible vehicles, adds charging stops along a planned route based on current vehicle charge and charger types.

— Flyover offers a way to see select major metro areas, such as Calgary, Montreal, Toronto, Vancouver, and more, with photo-realistic, immersive 3D views. Users can move their device through space to experience a city from above, or explore in high resolution as they zoom, pan, tilt, and rotate around the city and its landmarks.

— Indoor Maps for airports and malls in Calgary, Edmonton, Montreal, Quebec City, Toronto, and more, makes it possible for users to simply open the Maps app and see what level they are on, restroom locations, and even which stores and restaurants are open.

— Share ETA sends an estimated time of arrival to family, friends, or coworkers with a simple tap. The receiver can follow along on the journey, and Maps will even update them with a revised estimate for when the traveller is arriving if a significant delay occurs.

— Favourites provides one-tap navigation to frequent places. Whether it’s home, work, the gym, or school, users can simply tap and go once the location is in Favourites on the launch screen.

Maps helps hundreds of millions of people in over 200 countries and territories discover new places, navigate, and explore the world. Privacy is central to the Maps experience, offering personalized features created using on-device intelligence, and it is everywhere customers are: at home, in the office, on the go on users’ iPhone, iPad, Mac, and Apple Watch, and in the car with CarPlay. Maps is deeply integrated into Photos, Messages, Calendar, Weather, and more.

Apple is committed to keeping personal information safe and has built privacy into the core of Maps. With Maps, no sign-in is required and it is not connected to an Apple ID in any way. Personalized features, such as suggesting departure time to make the next appointment, are created using on-device intelligence. Any data collected by Maps while using the app, like search terms, navigation routing, and traffic information, is associated with random identifiers that continually reset to ensure the best possible experience and to improve Maps. Maps goes even further to obscure a user’s location on Apple servers when searching for a location through a process called “fuzzing.” Maps converts the precise location where the search originated to a less-exact one after 24 hours and does not retain a history of what has been searched or where a user has been.

Apple revolutionized personal technology with the introduction of the Macintosh in 1984. Today, Apple leads the world in innovation with iPhone, iPad, Mac, Apple Watch, and Apple TV. Apple’s five software platforms — iOS, iPadOS, macOS, watchOS, and tvOS — provide seamless experiences across all Apple devices and empower people with breakthrough services including the App Store, Apple Music, Apple Pay, and iCloud. Apple’s more than 100,000 employees are dedicated to making the best products on earth, and to leaving the world better than we found it.

The Caribbean Minus the Crowds: 5 Great Places to Try
Splashy, New Marriott Hotels Coming to Toronto, Burlington and Montreal
Great Things To See and Do in Delaware: Home of President Elect Joe Biden
The Ten Cheapest Cities in the World For Hotels