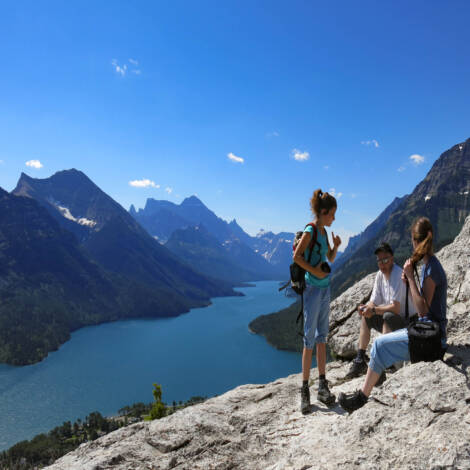 Here’s our first annual (we hope) Canadian Travel News Geography/Travel quiz. We hope you enjoy it. Feel free to pass along any thoughts or criticism. We can take it.

ANSWERS AT THE BOTTOM

2. Alberta is home to a national park that shares a border with a U.S. national park. What’s the name of the park on the Canadian side of the border?

3. What did First Nations people call the area we know as Montreal?

4. What Canadian city is home to a popular area called The Forks?

The city of Toronto has more residents than the provinces of Prince Edward Island, Nova Scotia, New Brunswick and Newfoundland + Labrador put together.

6. Chateau Lafayette is a lively pub in downtown Ottawa. What do locals call it?

7. This small city in British Columbia is famous for its surfing scene. What is it called?

8. There’s a small desert in the Yukon with sand dunes you can scamper around on. What is it called?

9. Speaking of sand dunes, what is the name of the large formation of dunes in northern Saskatchewan?

A. The Lorna Dunes

10. This New Brunswick town is home to the Ganong Chocolate Company. What is it called?

D. St. Andrews by the Sea

11. This waterfall northwest of Thunder Bay is sometimes called the Niagara of the North? What is its name?

12. In what province will you find a small village called Ecum Secum?

13. In what Canadian lake will you find the legendary monster called Ogopogo?

14. How far is Toronto from the United States border?

15. What Canadian city is home to the Famous 5 Centre of Canadian Women, which honours a group of female Canadians who successfully pushed to give women the right to vote?

16. Middle Island in Lake Erie is the southernmost mainland point in Canada. What U.S. city is at roughly the same latitude?

The town of Skinners Pond in Prince Edward Island is home to a museum celebrating the potato.

18. Gimli, Manitoba has a yearly festival that honours the culture of what country?

19. Benjamin Bridge is making award-winning sparkling wine these days. Where will you find their winery?

B. The Okanagan Valley, B.C.

20. This famous river is known as one of the best paddling places in the Northwest Territories. What is its name?

A. The Tuktoyaktuk River

B. The Nahanni River

21. In what year did Nunavut become a separate territory of Canada?

D. It’s not a territory, it’s a province

22. This provincial park in Ontario is known to First Nations people as Kinomaage-Waapkong, or, in English, “The Teaching Rocks.” What is the name you’ll find on a map of Ontario parks?

23. What Montreal native is known as the founder of the city of New Orleans?

24. Saskatchewan is home to a popular salt water lake. What is it called?

25. This fjord is a popular spot for cruisers in Quebec. What is it called?