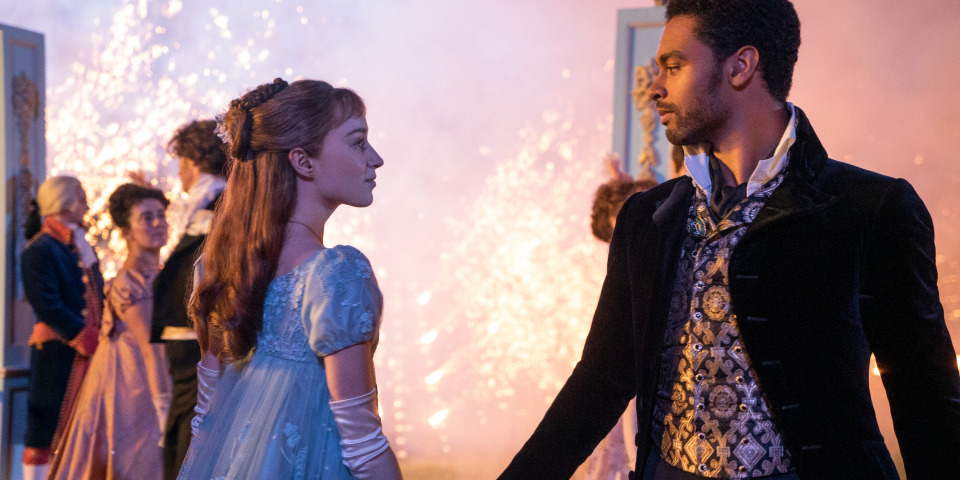 Based on the bestselling books by Julia Quinn, produced by Shonda Rhimes (of Grey’s Anatomy and Scandal), and narrated Gossip Girl-style by none other than Dame Julie Andrews, the period drama, set in England in the early 1800’s, follows the Bridgerton family and their high society lives and romances.

Settle back on your sofa, grab the Quality Street, and get inspired to plan a trip to explore the locations in Bath used for filming in the series.

Tucked away behind the Roman Baths, you’ll find The Abbey Deli (previously called Pickled Greens), on Abbey Green. The café stands in for the Modiste – a dress shop key to the story. Filming took place inside and out of the Grade II listed building, which features traditional doubled-fronted bay windows. Another part of Abbey Green was also used to stand in for Covent Garden, London.

The exterior of No.1 Royal Crescent is used as the home of the Featherington family. In the story, Lady Featherington devotes her time to navigating her three daughters through the social season to find them suitable husbands. No.1 Royal Crescent – due to reopen in April 2021 – is a museum which has been decorated and furnished just as it might have been in the late 1700’s. The rooms feature historic furniture and objects that reveal what life was like for Bath’s fashionable residents, both upstairs and downstairs.

One of Bath’s most iconic landmarks makes for an impressive backdrop for filming, so you won’t miss it when it appears in Bridgerton! The Crescent – built between 1767 and 1775 – is arranged around a perfect lawn overlooking Royal Victoria Park and forms a sweeping curve of 30 Grade I listed terraced houses.

Bath Street, with its cobblestones and striking line of colonnades down each side, appears in the first trailer for the show and is used for several street scenes. At the end of Bath Street is the Cross Bath and Thermae Bath Spa. Hence, this area is known as the Spa Quarter, where the water bubbles up from the springs at a temperature of 46 degrees. Unadorned by shop signs and capturing eighteenth-century Bath perfectly, the street definitely lends itself well to filming!

Beauford Square, used for more street filming, is a square of two-storey cottages built in 1730 to a design by John Strahan. The south side is formed by the original frontage to Theatre Royal Bath, and in the centre was a communal garden. It is now a small rectangular lawn, enclosed with wrought iron railings. The interior of a shop on Trim Street, around the corner from Beauford Square, also features in the series.

Bridgerton promises to be full of high-society events and lavish balls, where the characters dance and socialise under the watchful eye of the entire town. The Tea Room and Ball Room of the Assembly Rooms make perfect, grand backdrops for the sumptuous ball scenes full of glamorous and vivacious costumes and hairstyles. Once the social epicentre of Georgian Bath, the rooms are still in use for functions and conferences, and you can visit them when they are not in use. Grand and elegant, the Assembly Rooms are home to spectacular, original Whitefriars crystal chandeliers and the largest eighteenth-century room in the city.

The exterior of the Holburne Museum was used for filming the entrance to one of the ball scenes in Bridgerton, standing in for Lady Danbury’s grande abode. On the impressive approach, via the wide Great Pulteney Street, the building’s elegant façade and gardens provide an inkling of its grandeur and history. The Grade I listed building was originally designed and constructed as a hotel, but is now home to a collection of fine and decorative art.

Like a Local: How to enjoy Victoria, British Columbia
A Socially-Distanced Visit to Montreal: Great Things To Do While Staying Safe
Black Friday Deal of the Day: Great Bonus Event From redtag.ca
U.S. Travel Insurance Group Names Canada World's Safest Country To Visit For 2021