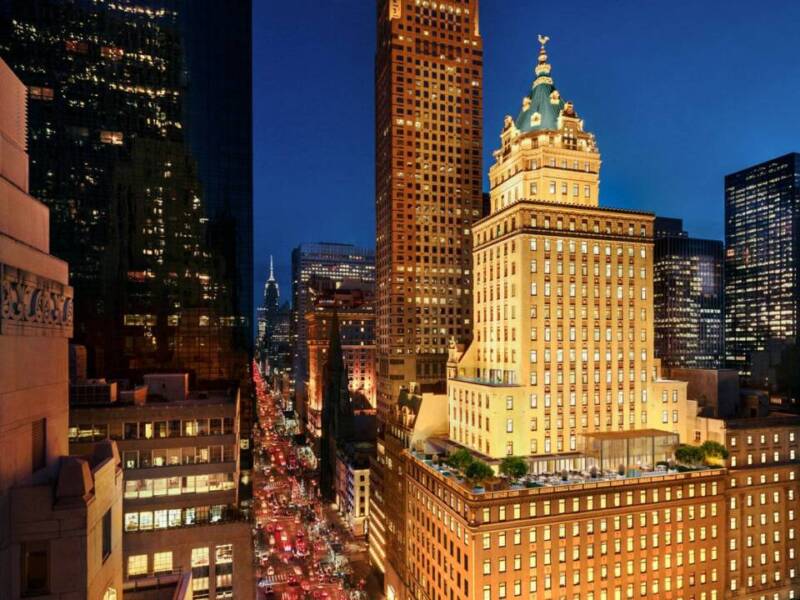 From New York to Florida to L.A., Cool, New Hotels Arriving This Year Across the U.S.

We’re not travelling much right now, but when the time comes, travellers will have a ton of new hotels to check out across the United States. Here’s a look at a few of them, as well as the odd event that’s taking place.

The Drake Hotel is celebrating 100 years of operations. This year also marks the 150th anniversary of the Great Chicago Fire, allegedly started when a cow owned by a Mrs. O’Leary kicked over a lantern. It’s probably not true, but it’s a good story, and songs have even been written about it, including one by Brian Wilson of The Beach Boys.

Chicago’s newest Vista Tower skyscraper, the third-tallest building in Chicago, is being rebranded as The St. Regis Chicago, after the owners signed an agreement with St. Regis Hotels & Resorts to manage a 191-room luxury hotel. The St. Regis Chicago also will include 393 luxury condominiums, complete with a sky terrace and outdoor pool on the 47th floor, as well as a private lounge and dining room, a demo kitchen, golf lounge and more. The Alinea Group, one of the best in the U.S., will operate a fine dining restaurant with an outdoor terrace, an all-day restaurant and lounge overlooking the Chicago River and a bar with an outdoor terrace as part of the luxury hotel. The hotel is scheduled to be completed in Fall/Q3 2021. (345 E Wacker Dr Ste 100)

The Reserve Hotel, located on South LaSalle Street in the heart of Chicago’s financial district, will be a 234-room luxury hotel occupying the top five floors of a historic landmark building. (It will sit atop the JW Marriott Hotel, which already occupies the first 12 stories of the former Continental building.)Expected completion of the property is projected for Fall/Q3 2021. (208 South LaSalle Street)

Sable Hotel at Navy Pier (a Curio Collection by Hilton property) will be perched aside one of Chicago’s most beloved and iconic destinations – Navy Pier – and located just steps from cultural attractions like Chicago Shakespeare Theater and the Crystal Gardens. The Offshore Rooftop and Bar will be the biggest in the U.S., with a 20,000 square foot terrace, multiple firepits and an entertainment area – the hotel is slated to debut in late Q1 of 2021.

The nation’s music capital, Nashville, is bringing back musical stars of the past at the soon-to-open National Museum of African American Music, a curated celebration of music genres created, influenced and inspired by African Americans. Plan a visit and stay at the new Element Nashville Vanderbilt West End, which is close to Music Row. Or, visit the “soul of the Gulch” when W Nashville opens, with bold outdoor spaces offering curated musical experiences, intriguing dining and expertly crafted cocktails.

Built in 1883 and recently renovated, the Columns hotel is in the romantic Garden District and features a rooftop sundeck, private garden and a new southern-style restaurant. It’s supposed to open this month.

In Phoenix, the Desert Botanical Garden’s highly anticipated art exhibition Wind, Water, Earth opens this month and features large-scale living sculptures created by Natasha Lisitsa and Daniel Schultz of Waterlily Pond Studio. Inspired by the elements of the desert, floral and plant materials are the medium that brings three intricate installations to life for only a few weeks.

The ongoing revitalization of downtown Tucson continues with two new hotels slated to open in 2021. Tucson’s first dual-branded Hilton is scheduled to open in mid-2021 with a 123-room Home2 Suites and a 170-room DoubleTree by Hilton, slated to open in early 2021. Look for a second-story pool, a mesquite-themed restaurant and two bars in this wonderful Arizona city.

Sedona’s new, sustainable Ambiente Hotel is set for a summer opening with 40 modern guest “atriums,” which have been elevated to maximize views of the area’s famous red rocks.

The Bushwick area of Brooklyn is set to host the Life House Bushwick later this year. It’s set in a former bank designed in the Beaux Arts style, with 29 rooms and a rooftop bar overlooking Brookly and Manhattan.

Following the opening of the first voco in the U.S., voco – The Franklin New York, a charming boutique property in Manhattan’s Upper Eastside near Central Park, there are several new properties on the horizon for 2021:

The much-anticipated Comic-Con Museum is slated to open in late summer 2021 in Balboa Park. The new museum will be a place where audiences can connect with the magic of Comic-Con year-round. Museum-goers can expect 25,000 square-feet dedicated to rotating exhibits; a 6,000-square-foot education center; a 4K video theater and presentation space; a gift shop filled with comics, graphic novels, branded souvenirs and more; learning-focused labs, and classes and seminars. The new Comic-Con Museum will be set in the former Hall of Champions near the Pan American Plaza.

New Redwoods to Explore: The Harold Richardson Redwoods Reserve in Sonoma County will be opening to the public in 2021: https://www.outsideonline.com/2376856/harold-richardson-redwoods-reserve-opening

Pendry West Hollywood will be in the heart of L.A’s flashy entertainment area, the fabled Sunset Strip. Look for 149 guest rooms and suites offering great views of the L.A. basin and the Hollywood Hills, as well as food and beverage offerings by celebrity chef Wolfgang Puck. Also: a rooftop pool and signature spa, not to mention a premium bowling alley.

Fairmont Century Plaza in Century City/West L.A. has been completely reimagined to include 400-luxury guest rooms; 63-private residences; the 14,000 square-foot Fairmont Spa Century Plaza; Lumière – a modern American Brasserie; and nearly 24,000 square feet of private event space, including one of the largest ballrooms in Los Angeles. The new Fairmont Century Plaza is part of a $2.5 billion mixed-use development project centrally located in the heart of Century City.Opening: Spring 2021

The Thompson Hollywood is set to make its debut in the heart of Hollywood near the vibrant Vinyl District. The 200-room boutique property will celebrate the individuality and spirit of its iconic Hollywood neighborhood.  A rooftop pool, lounge and garden will boast stunning 360-degree views. Opening: Spring 2021.

Tommie Hollywood Hotel. The world’s first tommie hotel will offer an experience immersed in the culture and creativity of Hollywood. The 212-room, lifestyle-focused hotel from the Two Roads Hospitality brand will cater to artists and entrepreneurs alike, serving as an incubator of ideas, collaboration and exploration. Guests can customize their hotel experience while making the most of each moment, enjoying creative cuisine, lively nightlife, ground-floor retail and a casual rooftop pool terrace with panoramic city views. Opening Summer 2021

Wastin’ Away in Margaritaville

In 1971, after an incredibly overwhelmed bar and bit of inspiration from 7-Eleven’s famous Slurpee machine, Dallas restaurateur Mariano Martinez invented the frozen margarita machine – using an old ice cream machine – in Dallas 50 years ago, forever freezing in time the city’s claim to America’s favorite cocktail. Guests can now enjoy decades of heritage on the Margarita Mile – a curated collection of Dallas’ best and brightest margaritas, conveniently collected in a colorful app. In addition to earning fun prizes along the way, the Margarita Mile is one of the best ways to experience Dallas’ diverse neighborhoods and cultures, one cocktail at a time.

New Hotels for All Types of Travellers

The end of 2020 brought Dallas two beautiful properties: the Kimpton Pittman, in historic Deep Ellum, and Thompson Dallas, in the heart of Downtown. These two properties will be joined by more than 15 additional hotels in 2021, including the new Marriott Uptown. Set for a November opening, Marriott Uptown will be a 14-story, 255-room hotel incorporating Marriott’s contemporary design scheme and will feature meeting spaces, a restaurant, and a rooftop pool deck. Located in the trendy Uptown neighborhood, the hotel will be within walking distance from Katy Trail and other vibrant attractions.