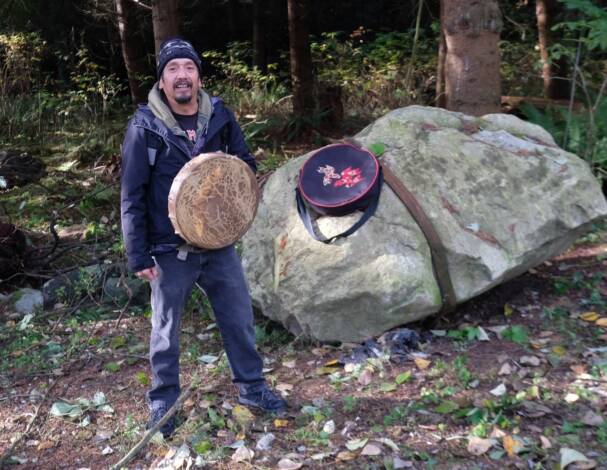 VANCOUVER – Wes Nahanee and I are traipsing about Stanley Park in Vancouver on as fine an autumn day as one can legally imagine.

Nahanee works with a group called Talaysay Tours, a First Nations-owned company that leads tours in British Columbia and explains the way of life of the Squamish (Skwxu7mesh Uxwumixw-Coast Salish) First Nations people, who lived here for centuries prior to the arrival of Europeans.

Stanley Park is known around the world as one of the best urban parks on the planet; a huge outcropping of land that juts out from the peninsula that is downtown Vancouver. Tourists mostly see the totem poles and walking paths and bike lanes that circle the park, but there’s a massive forest of ancient trees, small ponds and hundreds of species of plants in the park’s interior. Which is where Nahanee and I spend most of our 90-minute tour, which he tells me is a combination of two officials Talaysay runs, the “Talking Trees” tour and the “Spoken Treasures” visit.

“The way it was put to me as a child is that this tree is one of our great gifts in life,” Nahanee tells me. “The red cedar provides us with wood for housing and transportation and also for carving our art work. The cedar boughs can be used for tea. For us, this tree is a member of the family.”

Nahanee, whose ancestral name is Chiaxsten (one who looks after the laws and protocols of his people), tells me this part of what is now Stanley Park was once home to hundreds of members of the First Nations people.

From the bus loop we head west to an old tree that Nahanee thinks was probably cut down 100 years ago. We look 10 or 12 meters in the air to the top of the stump and see a huckleberry bush growing from the top of the stump. Nature at her best, I think; taking life and turning it into opportunity for another species.

“Are those raspberries?” I ask.

He explains how some are more reddish in colour when ripe, but others are pinky-orange.

“When I was a kid I used to come here with my Mom. She’d always say, ‘Don’t eat the pink ones.’ I never knew why. A couple years ago, when she was much older, I came through the park with her and saw her eat one of the pink berries. I said, ‘Mom, you told us not to eat those!’ She looked at me and laughed and said, ‘I just wanted to save them for myself.’”

Here Nahanee stops to sing a beautiful, haunting Squamish song that was written by a native Canadian padding from here to the area now called Squamish.

We walk past another red cedar, with an exposed trunk that’s all knotted and crumbly. He takes some of the crumbling bits and rubs them on his hand, creating an orange-red stain.

“My people would use this for face-painting or for painting rocks,” he tells me.

A few metres up the woody path we’re walking, Nahanee spots small plants called plantain, which are not related to the banana-like plants you’ll find in the Caribbean.

“When I was a teenager I was skateboarding and fell. I tore up all the skin on one side of me. It took me three hours to walk the six blocks I had to go to get home. My mom said, ‘Go get some frog leaf,’ which is what we called it. I brought some home and she chewed some of the leaves to release the serum inside. Then she wrapped it around my cut.

“I went to the doctor a couple days later and he couldn’t believe how well the cut was healing. He asked me if I wanted to use some white men’s medicine or the plantain. I kept the plantain.”

A short distance away we spot giant leaves on what he calls a skunk cabbage.

“The roots are edible,” Nahanee tells me. “They usually have yellow flowers. If you put murky water in the flowers it filters the water and makes it drinkable if you’re really thirsty.”

From there we head up to Beaver Lake, which is mostly dry and brackish these days but has a small patch of open water with handsome wood ducks paddling about.  His ancestors, he says, used to come to this freshwater pond and gather unsuspecting fish by the armful for dinner.

We sit at a bench by the side of the pond and Nahanee pours me a cup of what he calls Labrador tea, made from bushes that are relatives of the rhododendron and grow wild in the park.

I stop to admire the sun filtering through cedars and brilliant yellow autumn leaves.

Nahanee struggles for a minute. He comes up with a Japanese phrase, but that doesn’t seem right.

After a few seconds, he replies with a Squamish phrase, “chexi’u yu.”

I ask what it means.

“Take care,” he replies with a smile. “And enjoy.”

The folks at the Fairmont Waterfront Hotel can set guests up with Talaysay Tour visits to Stanley Park. They also have a  First Nations’ inspired tasting menu available at their bright, modern Arc Restaurant.  I had a nice venison dish and amazing sablefish with foraged mushrooms and sea asparagus.

A First Nations’ tour on the water

The trips don’t run in winter, but the folks at Takaya Tours in North Vancouver can take you out in gorgeous canoes and tell you about the Tsleil-Waututh First Nations people who live in the region.

“We wanted to put our cultural identity on the map,” business development manager Dennis Thomas tells me as we stroll along through Cates Park, the waterfront park where they launch their canoes, which are painted with stunning First Nations’ designs.

“You can follow our history while you paddle along in an ocean-going canoe” and get some fresh air and exercise at the same time, he tells me.

“I love it because I get to learn about the history of my ancestors. Now I know my songs and my history.”

Thomas tells me that archaeologists can trace his people’s history in the area back 4,500 years. Their oral history goes back twice as long.

Thomas shows me an old shell mound in Cates Park, which the Tsleil-Waututh call Whey-An-Wchichen (Facing the Wind). The mound was created from thousands of years of discarded shells piling up near the shore.

“Our people were removed from this place in 1860 as part of the Canadian government’s assimilation program,” he says in a matter-of-fact voice. Several hundred people live on the Tsleil-Waututh (the English translation is People of the Inlet) reserve in North Vancouver, which now has a gleaming community centre and other amenities.

Most trips with Takaya Tours are two hours, but they sometimes do longer trips of two nights and three days.

If you’re looking for a cool, boutique hotel with a First Nations component, Skwachays Lodge in Gastown is a marvellous place to stay. Rooms are done with up indigenous art and designs. There’s also a lovely gallery. Proceeds help fund a First Nations artists-in-residence program.