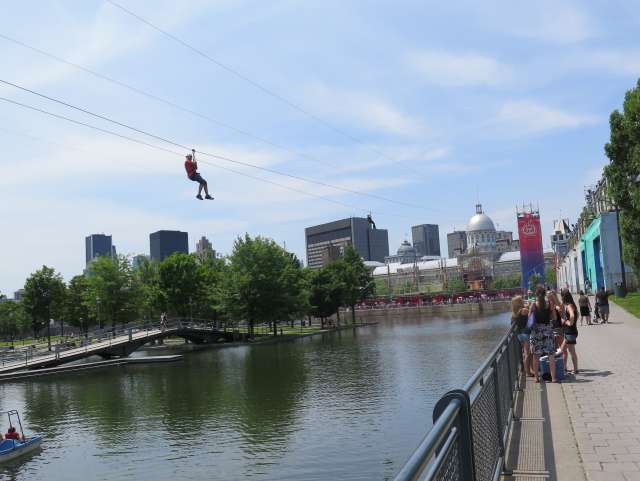 Montreal is one of the great cities of the world; a cosmopolitan destination with a remarkable history, amazing neighborhoods to explore and a wonderful waterfront. Here are five things to do in the city for less than $50.

The market is located on the edge of both Little Burgundy and Saint-Henri, two of the city’s trendiest neighbourhoods, and is directly alongside the Lachine Canal, which is a destination in and of itself. You could drive or take transit, but the best option from downtown in good weather is to ride a BIXI bike, which you can rent for a half-hour for $2.95.

You can ride along the canal for much of the ride to Atwater Market, which is only a few kilometers from downtown Montreal. In the Little Italy area of Montreal’s north end, the Jean-Talon market is one of the largest open-air markets in the world. You’ll find wonderful produce in summer, as well as gourmet food shops and fresh flowers.

is a wonderful spot along the St. Lawrence River. There’s no charge to wander about and enjoy the scenery but some activities cost a few dollars. It’s $22 for adults to catch the exhibitions at the Montreal Science Centre, with discounted prices for teens, children and seniors. They also have family packages. If you want to catch a movie at the IMAX Theatre, it’s $12 for adults and less for kids or seniors. .

A one-hour boat ride with the folks from Le Bateau-Mouche is a fun way to get out on the water and see the city from a different perspective. It costs $26 for adults, and each adult can bring a child between six and 14 for free. Otherwise, children 6-14 pay $13. Kids five and under are free.

You can also try the zipline over Bonsecours lagoon, which provides a magnificent view of the port and the St. Lawrence. It’s $19.99 for adults and $16.99 for children.

There’s no charge to wander about the old part of the city, which is one of the great treasures in Canada. You’ll find trendy clothing stores and other shops, great galleries and dozens of restaurants. For breakfast, I love Olive et Gourmando, where they make amazing granola.

Pointe-a-Callière is a cool museum focussed on the city’s history and archaeology. You’ll find amazing ruins that date back centuries to the city’s very beginnings, as well as historic artefacts and ongoing exhibitions. One of the current exhibits focuses on French cuisine. Entry is $22 for adults, with discounts for seniors and children. A few steps away is one of the best places for croissants in the country, Maison Christian Faure.

Montreal bagels might be the world’s best; a slightly sweet bagel that’s dipped in honey and water before being cooked in a wood-burning oven. The two best-known spots in the city are only a few blocks apart in the Mile End neighbourhood; Fairmount and St-Viateur. Ah, but which is best? “Honestly, if you closed your eyes you probably couldn’t tell them apart,” one Montreal tour guide told me a couple years ago. “You basically make your choice as a kid and from then on it’s ‘Until death do us part.’”

Wilensky’s is a fun, old-time lunch spot near Fairmount Bagels that was made famous by Mordecai Richler. Ask for the Wilensky Special (less than $5), which is all-beef bologna and all-beef salami on a roll with mustard. Do NOT ask for substitutions.

The Museum of Fine Arts is a massive facility that features several buildings connected via tunnels, which is quite useful on a winter or a rainy day. There’s a vast array of thought-provoking art from all over the world, as well as a fine sculpture garden. One of the most unusual things you’’ll see is a painting by Cree artist Kent Monkman called Trilogy of St. Thomas, which shows a white explorer making off with a native Canadian who’s wearing a headdress of traditional feathers and high heels. Could be a tough one to explain to the kids but it’s fun. You’ll also find amazing, 13th-century carvings from Iran and lovely works from Canada’s renowned Group of Seven. It costs $24 for adults 31 and up and $16 for folks from 21 to 30. Those 20 and under get in for free.

Jim Cuddy Concert and Great Wine: A Day at Burning Kiln Winery and Long Point Eco-Adventures
Canadians, Americans: No vaccine, no flying or cruising
World's Top Cities and Best U.S. Islands: Did Your Fave Place Make the List?
Kelowna, British Columbia: As Tasty As It is Beautiful