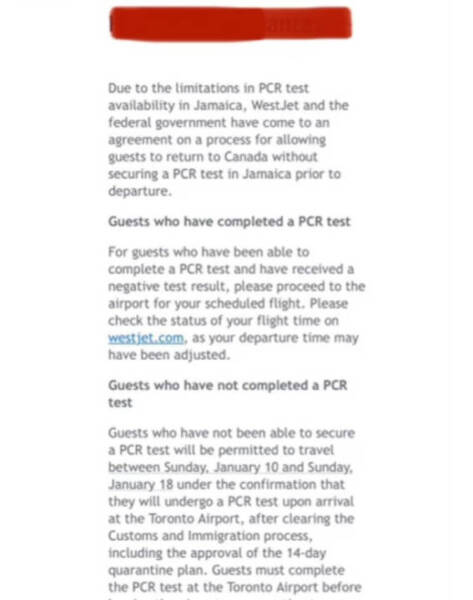 Confused Canadians in Jamaica are being given new rules about coming home to Canada, and WestJet says the Liberal government will now let Canadians fly home without taking a COVID-19 test.

Canadian Travel News spoke with the member of a Canadian family in Jamaica who said that Jamaica’s clinics were full, forcing them to pay $1,400 USD for a family to get PCR tests for COVID-19, as mandated by the Justin Trudeau government in a ruling that took effect on Thursday, January 7. But another Canadian family got a letter from WestJet saying it had spoken with the Liberal government in Ottawa and that Canadians in Jamaica would be able to fly home during a specified time period because there’s not enough testing in the island nation.

The letter from WestJet, obtained by Canadian Travel News, says that “due to the limitation in PCR test availability in Jamaica, WestJet and the federal government have come to an agreement on a process for allowing guests to return to Canada without securing a PCR test in Jamaica prior to departure.”

WestJet said guests who have a negative PCR test can proceed to the airport in Jamaica for their regularly scheduled flights. For those who have not been completed a test, the airline says guests “will be permitted to travel between Sunday, January 10 and Sunday, January 18 under the confirmation that they will undergo a PCR test upon arrival at the Toronto Airport, after clearing the Customs and Immigration process, including the approval of the 14-day quarantine plan.

“Guests must complete the PCR test at the Toronto Airport before leaving the airport or connecting” to another flight, the WestJet note said.

The Jamaica Gleaner website reports that “hundreds” of Canadians are stranded in the country due to the new testing rules.

Canadian citizen Denise Mendez is among those who are affected by the new policy after she decided to visit the island on December 30 to see her ailing mother.

“It was my mother’s 70th birthday and my mom has Parkinson, so me and my sisters said you know, this is a milestone for her and so we said you know we kind of wanted to celebrate this,” she said.

Mendez, who is scheduled to leave Jamaica on a Caribbean Airlines flight on Sunday morning, said the new requirements were announced while she was in Jamaica. Since being informed, she tried to set an appointment with Microlabs Limited, but she said the next available date for testing according to their website is in February, The Gleaner reports.

Mendez said when she made contact with the Canadian Consulate on Thursday, she was told that several other persons are experiencing a similar issue.

“According to permanent secretary in the Ministry of Health & Wellness, Dunstan Bryan, an estimated 2,000 Canadians are scheduled to return to Canada between now and next week,” The Gleaner said. “However, several of these persons have been having a difficult time finding an approved private lab to conduct the required tests due to the demand.

Only two private labs have been approved by the Ministry of Health & Wellness to offer PCR testing for COVID-19 in Jamaica. They are Caribbean Genetics (CARIGEN) and Microlabs Limited, and the Gleaner said the labs are overwhelmed with testing.

“We sent our guests this correspondence as we anticipate issues for those currently in destination in Jamaica, specifically Montego Bay, with flights departing this weekend,” spokesperson Morgan Bell said in an email. “We issued an urgent notice to the hundreds of our guests scheduled to fly home this weekend from Montego Bay (MBJ) as we understand there is a lack of availability for PCR COVID-19 testing in the Montego Bay area.”

Bell said WestJet is “doing everything we can to work with guests in destination and those that have secured PCR tests should proceed to the airport for their scheduled flights.”

Bell said any added details would have to come from Transport Canada. Canadian Travel News has reached out to the office of Transport Minister Marc Garneau but has yet to receive a response.

Canadian Travel News also has obtained a copy of a note from a company in Kingston, Jamaica called Microlabs Ltd. The memo thanks a client for registering with the company’s Canada Visits Portal and says they’ve “been made aware of an exemption for travellers going to Canada” between January 11 and January 18.

“These exemptions include not having a negative PCR-SARS-CoV-2 test,” the note says. “We are advising you to contact your airline to confirm that you qualify for this exemption before preparing for a test.”